BTK Lecture Series on The Archetype, The Cliché and Other Simplifications

Stereotypes — constructed simplifications that are reinforced and scattered throughout our culture, largely through the mass accumulation of visual, systemic and interactive representations created by the media producers that we, at BTK, are busy building or becoming.
This lecture series takes a critical look at the encyclopedic barrage of subtle (and at times not so subtle) imprints about gender, body, sexuality, identity, race, age, nationality, ability (this list never ends) in our media-driven culture. When left unchecked, this collective flow of ‘pictures’ form the conscious and unconscious biases that lay the foundation for generational, institutional and commercial prejudice, and discrimination.

Poverty in Games as Narrative Cliché and Ludic Paradox 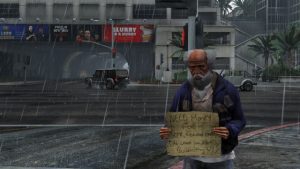 Video games depend on narrative, visual and conceptual stereotypes to be playable – they offer quick orientation even in complex or unclear situations. But stereotypes never only serve as a neutral tool. They also convey simplified preconceptions and meanings about the world. When an used stereotype touches on a much discussed topic in society – like racism or sexism –, the game automatically becomes political. This is especially problematic, when the communicated cliché is not only superficial but gets reinforced by the underlying systems of the game. While you can simply put a half-naked heroine in reasonable armor, you can’t fix a game whose stereotypic depiction of poverty is mirrored in the rules of the game. The talk will focus on the misconceptions and paradoxes of the representation of class-related struggles in video games. Besides giving an introduction to the function of stereotypes for gameplay, it wants to show, how games misrepresent poverty as something that is unspoilt by the power structures of society.

Christian Huberts, born in 1982, studied ›Cultural Studies and Aesthetic Practice‹ and gained a degree at the University of Hildesheim. Currently he is an editor for the games bookazine WASD, a curator for piqd.de and has regular appearances as an expert for digital games at cultural congresses and workshops. In addition he writes articles for newspapers, scientific publications and cultural magazines about the participation in digital worlds and the culture of video games.

You can find more of his work on schauanblog.de.

Vorheriger Beitrag «
Six invited lecturers, representing a variety of the BTK disciplines, offer diverse perspectives on stereotypes prevalent in our creative practice, in our educational system and in our professional industry.
All lectures are held in English at the BTK University of Art and Design Berlin Campus, except Till Penzek on 14.12, who will be in German at the BTK Hamburg Campus.
FREE AND OPEN TO THE PUBLIC
Download Flyer